Why Are My Orchid Leaves Wilting? 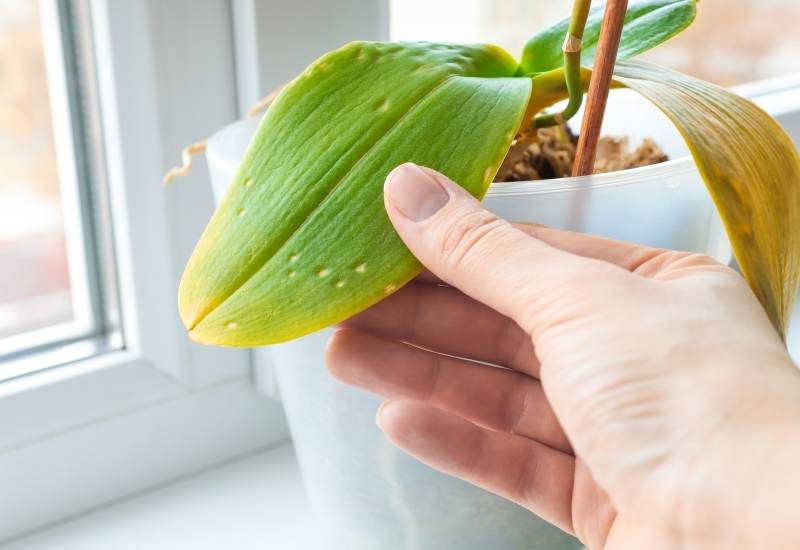 The state of your orchid leaves can be a prediction of the future of your plant. Many issues can pop up regarding the health of your orchid leaves, from white spots to black fungus, but wilting leaves are one of the most common. If you’re wondering why are my orchid leaves wilting, take comfort in knowing that you’re not alone. The good news is that there is typically one solid reason behind drooping, wilted, and wrinkled orchid leaves, and for the most part, it’s an easy fix!

Why are my Orchid Leaves Wilting?

Understanding the difference between overwatering and underwatering is quite apparent.

In one case, you’ve given your orchid too much water, and in the other, you haven’t given it enough.

However, when your orchid leaves start to wilt, it can be challenging to assess which issue is at hand, especially if you’re new to gardening and you’re genuinely unsure if you’ve over or underwatered.

This very situation happened to me when I first began to care for orchids, and I wouldn’t have been able to figure it out without the help of my local florist!

Root rot is a major cause of wilting orchid leaves, and it happens when your orchid has been sitting in water for too long.

This could occur if your soil doesn’t drain well, but you’re likely overwatering your orchid.

When roots begin to rot, your orchid will no longer be able to pull water up through them. In turn, the leaves will become dehydrated and begin to wilt.

When it comes to orchids, too much water is definitely not a good thing.

Just as we can overwater them, orchids can be underwatered as well. If the moss or bark mix you’re growing your orchid is kept too dry for too long, you’ll see wilting, wrinkled, droopy leaves.

You should be able to spot underwatering reasonably early on, as the leaves near the bottom of the plant will droop first.

If lack of water continues, eventually, the entire plant will wilt.

Determining if Your Orchid is Too Dry or Too Wet

When you first notice that the leaves of your orchid are limp and wrinkly, you need to take action.

The first thing you’ve got to do is check the medium in which your orchid is growing. Notice if it’s much too dry, or soaking wet, or somewhere in between.

If you’ve felt the soil and you’re feeling unsure as to whether or not your orchid needs water or has too much, then you’ve got to check the roots.

Shriveled roots mean that your orchid is far too dry, while mushy roots that easily pull away from the stem are much too wet.

There are clear, plastic pots available for orchids and plants like them that help the planter see the root’s health.

Because the growth and health of an orchid rely so heavily on the root system, it’s not a bad idea to invest in them.

If you’ve established that your orchid is too dry, then you know that the next step is to add water.

You can do so correctly by taking the entire plant to the sink and soaking the medium in room-temperature water for 15 to 30 seconds.

Many gardeners choose to soak their orchids as well. You can do so in a planter with no drainage hole for about 15 to 30 minutes.

An overwatered orchid is a different story, as you’ll have to cut away some of the root systems and repot the plant.

Cut away the wet, rotted roots and place your orchid in a smaller pot, allowing the space to establish itself.

Frequently Asked Questions About Why Orchid Leaves Are Wilting

Why are my orchid leaves wilting?

Orchid leaves wilt because they have been over or underwatered, and the state of the root system is dehydrating the rest of the plant. Yes, a rotted, soaked root system can absolutely dehydrate your orchid, as mushy roots cannot pull up additional water.

Can my aerial roots be dehydrated if the underground roots are too wet?

The aerial roots on your orchid can dehydrate even when the base roots of the plant have rotted. Don’t use the aerial roots as an indication of your plants being over or underwatered. Instead, use the roots connected to the potting medium.

Can my wilted orchid be saved?

Depending on how long you’ve allowed the wilting to go on, it’s likely that you can save your wilted orchid. Unless the plant is completely dead, you should be able to revive it by watering it or letting it dry out.

Since orchids are notoriously picky, it can be frustrating when you feel you’ve done everything right, yet your leaves are wilting.

Try not to get lost in that frustration, and instead, get to the problem’s root. Literally!