How To Plant Dahlias From Seeds? 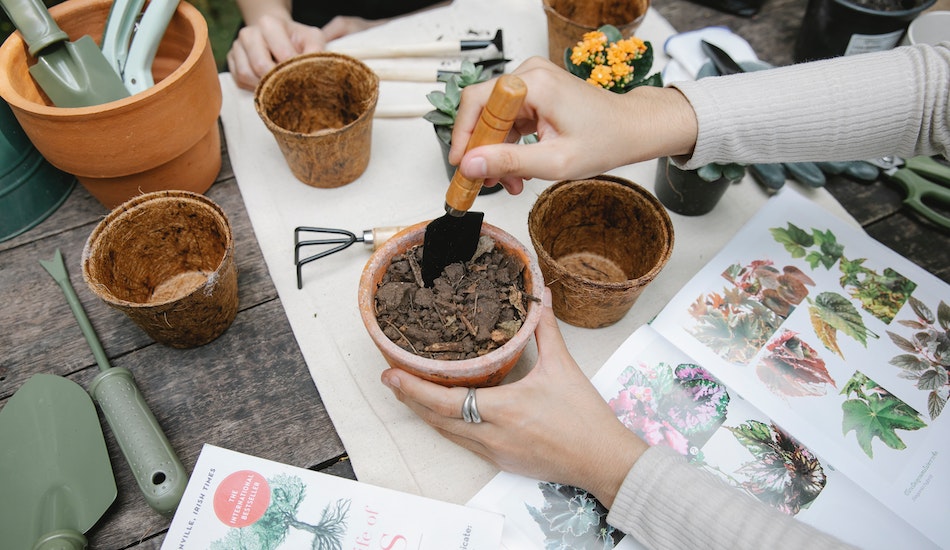 Affiliate Disclosure: Some of the links on this page may contain affiliate links. That means that if you make a purchase through one of these links, I may receive a small commission at no extra charge to you. Thank you in advance for your support of my blog!

What is the difference in growing dahlias from seed vs dahlia tubers?

Dahlia flower seeds get their genetic makeup from the seed parent as well as from the pollination of bees. That’s right, the bees and other garden pollinators actually play a huge role in determining what your dahlia seeds will eventually grow. The bees carry pollen from one dahlia plant to the next and actually modify the genetic make-up of the dahlia seeds. Most dahlia seeds will grow single or semi-double blooms with an open-center.

There are some amazing dahlia breeders like Kristine Albrech of Santa Cruz Dahlias who specialize in dahlia breeding. Kristine focuses on hybridizing new dahlia varieties from seed. If you are interested in learning more about breeding dahlias, you should check out Kristine’s book.

Instructions for growing dahlias from seed

There are several reasons you may want to consider growing dahlia flowers from seed. Growing dahlias from seed is much cheaper and more affordable than buying 10 or even 5 dahlia tubers. You can buy a packet of 25-50 dahlia seeds for less than $5. A single quality dahlia tuber will run you 5-25 dollars!

Another reason to grow dahlias from seed is for the sheer excitement of the unknown. It’s exciting to watch a plant grow from seed. You will find yourself waiting in anticipation, wondering what color, shape, and size dahlia you are growing. How neat is it to grow a variety that no one else has?!?

Here is what a handful of dahlia seeds looks like:

Where to buy dahlia flower seeds for growing?

If you decide that you want to grow your own dahlias from seed, here are a couple places where you can buy quality dahlia seed packets:

–Floret Flowers offers a Bee’s Choice Mix of dahlia seeds. I grew dahlias from this seed packet last year and let me tell you, I’ve never seen so many happy bees! This mix of dahlias produces a wide range of varying shapes and sizes. Most of these dahlias will be open-centered and single-bloom dahlias.

–Johnny’s Selected Seeds offers a Giant Hybrid Mix of dahlia seeds. I am giving Johnny’s dahlia seeds a shot this year and growing them in my trial garden. This mix of dahlia seeds is supposed to produce a mix of 3-5’’ double, semidouble, and single blooms.

When you should plant dahlia seeds

When growing dahlias from seed, you want to plant dahlia seeds indoors about 6-8 weeks prior to your last frost date. If you do not know your growing zone’s last frost date, you can find it here. This will give your dahlia seeds time to start growing and to be ready to plant outside. You do not want to transplant your dahlia starts outside until all danger of frost has passed.

How To Plant & Grow Dahlias From Seed

Once you decide to grow dahlias from seed, you will want to start your dahlia seeds indoors. Start your seeds indoors 6-8 weeks prior to your last frost date. This will give your dahlia flower seeds enough time to get growing so that they can flower in the summer months. It takes about 100-120 days for the seeds to produce flowers.

For the first method, start by taking two wet paper towels and placing the dahlia seeds flat on one. Cover the dahlia seeds with the other paper towel. Place the paper towels and seeds inside a zip lock bag. Lay the zip lock bag flat on the top of your refrigerator. Leave the seeds for 3-5 days. After that time, start checking the bag daily for signs of germination. Once the seeds have germinated, carefully plant the seedlings in a seed tray. Place the tray of seedlings under grow lights.

The other method is to plant your seedlings directly onto your seed trays. Fill your seed starting trays with seed starting mix. Poke a small hole in each of the seed cells. Place one dahlia seed in each seed cell. Bottom water the seed tray and cover with a clear acrylic dome. I like to place my seed tray on a heat mat and underneath grow lights. This ensures that the soil is warm enough for germination. Seedlings should emerge within 3-5 days.

I did an experiment this winter and tried starting dahlia seeds using both of the methods above. I actually found that the dahlia seeds sprouted in about the same amount of time using both methods. However, the seeds that were germinated underneath grow lights in the cell plug flats actually grew better initially.  Within a week of both being planted in cell plugs, it was hard to tell the difference in either method.

When To Transplant Your Dahlia Seedlings

If you live in a growing zone with a longer growing period, you can also direct seed your dahlia seeds into the garden. For this option, your soil needs to be at least 65-70 degrees F. You also want to make sure that all dangers of frost have passed.

When will my dahlia seeds bloom?

It can sometimes feel like an eternity waiting for your dahlia seeds to bloom with flowers. Dahlia seeds usually take 100-120 days to bloom. Depending upon when you sow your seeds, you will likely see your first dahlia flowers in mid-July.

Will dahlia seeds turn into tubers?

At the end of the growing seasons your dahlia seeds will have produced viable dahlia tubers that you can dig up and save for the following season. These dahlia tubers will produce identical plants Plant Dahlias From Seeds to what was grown this year. Be sure to check out my blog post for tutorials on removing and storing your dahlias over winter.

I always go through my dahlias that were started from seed and decide which ones to keep and which ones to toss. Last year I grew 75 Plant Dahlias From Seeds from seed and only kept 5 of the plants. I have these 5 dahlia clumps in winter storage and I will grow them again this summer. If these plants produce quality flowers in their second season, then I can name them and add them as a new dahlia variety to my collection.

Did this inspire you to try growing your own Plant Dahlias From Seeds?  There’s something so rewarding about growing plants from seeds you start! You can also save lots of money by growing your own dahlias from seeds. Plus, how neat is it that you can have dahlia varieties growing in your own cut flower garden that are different from any others in the entire world!

How long do dahlias take to flower from seed?

Start your seeds indoors 6-8 weeks prior to your last frost date. This will give your dahlia flower seeds enough time to get growing so that they can flower in the summer months. It takes about 100-120 days for the seeds to produce flowers.

Is it easy to grow dahlias from seed?

You will need a little patience though, as dahlia flower seeds take several seasons to produce blooms, but the effort is fun and can yield some surprising results from these naturally hybridizing plants.

There is no need at all to soak dahlia seeds before planting. Once planted they will be watered in, and the moist soil and heat will help to stimulate the germination of the seeds. The seeds will germinate very quickly after planting without any soaking. For best results, expose seeds to moist, cold conditions (stratification) prior to sowing. For cold stratification, place seeds in moist potting soil or sand and store them in a refrigerator for 4-6 weeks. After stratification, sow seeds in containers or direct seeds outdoors after the danger of frost has passed.