11 Dahlia Diseases: How To Identify 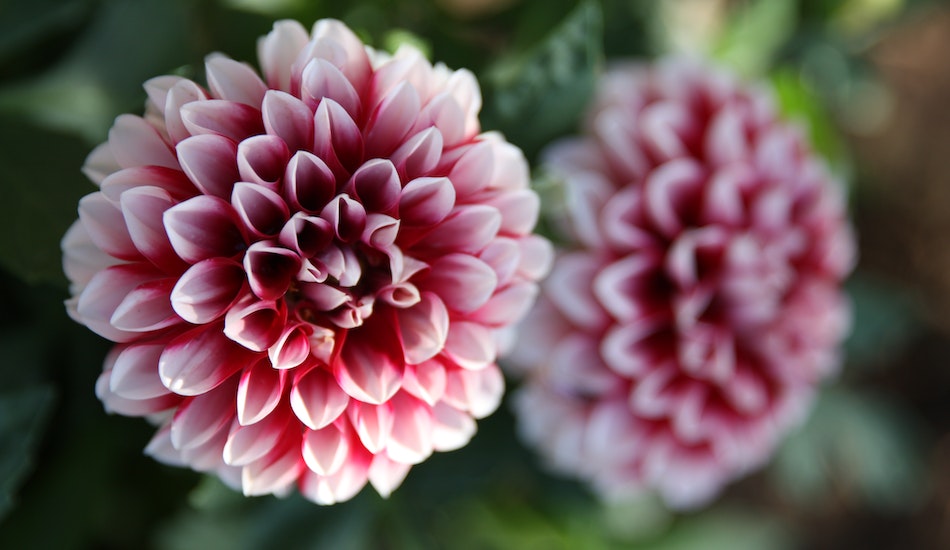 Dahlias can succumb to many different diseases. While there are many different types of disease that try to plague these beautiful flowers, the good news is there are ways you can prevent, and treat them. In this article, certified master gardener Liz Jaros examines the most common dahlia diseases. You’ll also learn how to identify, treat, and prevent them.

With 42 different species and thousands of colorful cultivars, dahlias have earned a special place in your heart. And most likely your yard. This year, you’ve planned, prepped, and planted your dahlias with care, but something doesn’t look right. And it’s devastating.

Maybe you’ve noticed some stunted growth or twisted stems. Maybe you’re looking at foliage leaves that have started turning yellow, or black. Or, perhaps some of your precious pink petals have turned brown and started to wilt.

Whatever the symptom, you’ll need to get right to the root of your dahlia’s ailment and start triage immediately. Here we look at 11 diseases known to infect dahlias, examine their causes, and discuss the best courses of action.

Since bacteria can be both beneficial and pathogenic, it’s important to remember that not all bacteria are bad. However, in the dahlia world, bacterial disease is almost always deadly and should be dealt with swiftly. Two of the most common bacterial diseases that affect dahlias are bacterial wilt and soft rot.

If your dahlias are suffering from this disease, leaves will appear darker than usual and wilt during the day. You might notice them perking up a bit at night, but eventually, they will turn brown and plants will collapse. Strands of bacterial ooze might be apparent when stems are cut cleanly with a pruning tool.

Unfortunately, bacteria has clogged up your dahlia’s vascular system and there is nothing you can do but take measures to prevent it from infecting other plants in your garden. Dig it up, including as much dirt from around the infected tubers as possible, and dispose of it in the garbage can.

If you’re noticing yellow, water-soaked spots, particularly at your dahlia’s outermost leaves, they might very well be suffering from soft rot. As bacteria continue to break down plant tissue, a foul odor and mushy stems might help confirm this diagnosis.

Again, with bacterial disease almost always being fatal, the best you can do here is remove the sick dahlias promptly and excavate as much of the soil around them as possible. Water evenly, space properly, and consider planting dahlias (or any other tubers) to a new location next year. You may even want to plant your dahlia tubers in a container, since bacteria can overwinter in most climates.

When a dahlia is infected with aster yellows, leaves may appear light green, yellow, or white and be stunted or deformed. Blooms may also be small, oddly shaped and pale in color. This disease is caused by phytoplasma, a small bacteria that can live in the veins of a plant or the body of an insect.

Typically transmitted by leafhoppers, prevention of aster yellows will involve pest control as well as bacterial management. Reflective mulches and light mesh covers can help to exclude leafhoppers from your dahlia beds but can be unsightly. Neem oil coated on leaf surfaces might be a better choice for discouraging leafhoppers without detracting from your dahlias’ natural beauty.

Always present in the soil, the fungus is known to wreak havoc in the dahlia garden. Not always apparent until the problem is advanced, fungus comes in many forms and can be difficult to treat. Let’s look at some of the fungal foes that are most likely to infect dahlias, and determine how to handle them.

Grayish or white, powder-like spots are the tell-tale signs of powdery mildew. This fungus will be glimpsed first on leaves, but might also spread to stems and blooms. It might also turn black later in the season. Look for it when climate conditions are characterized by high levels of humidity, but moderate day and night time temperatures.

While dahlias are particularly prone to powdery mildew, especially in spring and fall, the disease does not have to be fatal. If leaves, stems, or blooms appear infected, prune out the bad parts and leave the healthy growth alone. If you can live with the way it looks, and fungal growth is not too severe, plants with a little mildew can be left in place until the end of the season. At that point, cut stems to the ground and remove to prevent fungus from overwintering.

Fuzzy gray spores, and petals that are turning brown from the centers outward are indications of botrytis. This fungus is most likely to attack dahlias after an extended rainy period, so keep an eye out for it when the conditions are optimal.

Like powdery mildew, botrytis is a surface disease and not systemic. This means the damage is mostly aesthetic, and infected parts can be pruned off. Cut down and remove all above ground plant parts at the end of the season to prevent multi-season spread.

These fungi grow in a dahlia’s xylem and block water transport. Yellow leaves may be an early indication but typical symptoms of this disease include dark stem tissue near the soil level and streaky brown or black roots.

Both fungi thrive when temperatures swing suddenly from cool to warm, so look for signs of wilt when these conditions are met. Since wilt damage will affect the dahlia’s whole feeding system, it’s best to destroy and remove those that are infected.

Pale leaf spots with dark centers that begin on lower branches and trend upward can be symptoms of dahlia smut disease. Like most fungi, smut presents during wet periods or if irrigation is focused on leaves rather than roots.

If smut is suspected, prune off affected leaves and remove them from the garden. You may also want to prune some of the foliage to create more light and air flow, since crowding is a major factor in smut transmission.

Smut can overwinter in your dahlias’ tuberous roots, so if you’re bringing them in to overwinter, treat them with a fungicide and dry thoroughly before wrapping and storing.

Early symptoms of this fungus include browning and/or wilting stems. If stems are sliced open laterally, a string of tiny black spores can confirm a sclerotina dianosis. The spores spread easily in the air and cling to petals, which then cling to stems, perpetuating the cycle.

Prune off infected stems, taking care to not shake spores onto your soil surface. Remove and destroy them. Deadhead regularly and remove all petals from your garden beds.   If some are present, treat with fungicide and thoroughly dry tubers before wrapping them for winter.

Blight is a disease that feasts on dying dahlia blooms.

In warmer temperatures, this fungus will present with a ring in the soil around your dahlias’ stems. Initially small white spores will turn black and grow together to choke plants out. Dahlias will wilt suddenly and die.

Blight thrives on decaying leaves and blooms, so keep a tidy garden bed to discourage its spread. Monitor dahlias after periods of drought since the first heavy rain after a dry period creates optimal growth conditions. Planting dahlias in a raised bed can help discourage debris piles near their bases.

While some dahlias will show symptoms of viral disease, others will appear just fine and fail slowly over time.  Since viral disease is basically an illness that your other dahlias can catch and transmit, it’s important to know and trust the source of your stock, and to get out in front of any outbreak. Mosaic and ring spot are the viruses you’re most likely to encounter in the dahlia garden.

Look for irregularly colored leaves and pale green bands near your leaves’ veins to indicate the presence of dahlia mosaic virus. In some cultivars, the virus may be almost symptomless but will make itself known through diminished bloom intensity and slow tuber expansion.

While it might take a season or two, mosaic virus will eventually kill your dahlia, so if you suspect this disease is attacking your plant, remove it promptly and throw it away. Disinfect your tools diligently and control aphid populations.

Mottled leaf patterns and wavy or concentric rings are the tell-tale signs of ring spot.  To reduce your chances of unknowingly spreading ring spot, always take dahlia cuttings from the tops of fast growing, healthy looking plants. And stay on top of thrips.

How do I identify my dahlia?
The petals are often overlapping and curled for most of their length. Collarette dahlias have one row of flat petals surrounding a disc as well as an inner wreath of shorter petals called the ‘collar’.

Is there an app to identify dahlias?

Instant Dahlia 4+
Focus your device camera on a dahlia flower and the app will tell you its name instantly. Have you ever wondered about the type of beautiful Dahlia to add to your garden or out of curiosity? Our app will suggest you the exact or similar Dahlia types once you focus your camera at a flower.

can be difficult to differentiate between the ailments that affect dahlias. In most cases, the only reliable way to diagnose a specific disease is by sending a sample out for testing. But most of us are not going to do that every time a yellow leaf shows up in our beds. It’s most important to know the distinctions between a fungal condition and a bacterial or viral disease since the fungal disease can often be treated and is not always fatal. Unfortunately, the hard and fast rule for dahlia disease is always going to be ‘when in doubt, throw it out.’ Keeping transmission in check, and preserving the health of other dahlias in your yard should be your top priority.